I’m a fan of Google reader.  It has always worked well and I’ve found it a great place to synchronise my RSS feeds.

It gets closed down on 1st July so it is finally time to change.

I’ve decied to use Feedly and moved over tonight.  For once I can’t believe how smoothly the transition went – I didn’t have to sign in to Feedly or do any exporting or importing – it just worked.  Fantastic.

If you’ve not saved your google reader information then you’ll need to be quick …..

I’m possibly not a great person to talk to about Windows 8, whilst I have used it I don’t have it installed on my PC and still struggle with it every time.  Metro styling on a phone seems fine but I still don’t like it on my PC and too much is hidden for my preference however … it does seem that Microsoft are working on it and may have an announcement soon.

In the mean tine the windoe=ws customisation company Startdock ahve come up with 2 really useful sounding tools – Start8 and ModernMix.

Start8 returns the full power of Windows 7 back to the user and allows the machine to boot straight to a desktop environment (complete with start menu).

ModernMix allows an App to run in a window – perfect – what is the point of an app taking a 21 or 14 inch screen?

I’m going to be upgrading soon I think …. now that these tools are here

Get an overview here

I came across this word when reading about Apples new design for iOS (7).

Apparently skeuomorphic relates to making one thing look as if it mad from a different material – in software terms this might be a notepad screen being made to look like a piece of paper.

ANYWAY – iOS7 is on it’s way and looks set to be quite radical whilst being superficially similar – a clever feat and I’m sure that if anyone could pull this off then it’ll be Apple.

It’s been a feature of Windows since Win98 that every second version is not warmly received:

Maybe Windows 8 is the latest ‘Miss’ on the chain.

The story on the BBC website suggests that there has been a lot of negative feedback and that Microsoft are working on “Windows Blue” ready for release later this year.  Personally I always wondered at the decision to prevent the OS from booting directly to the desktop but then I’ve yet to use it seriously yet so am not really able to comment.

Some nice ideas on www.makeuseof.com.

With the imminent release of Windows 8 I find myself asking this same question, I’ve been asking it for as long as I’ve been involved with computers in education.

I loved RiscOS and argued for it’s use in education many times.  The counter argument was always about what pupils used at home and will use at work.  With minor OS changes happening every year or two and major changes happening every 5 years or so it is really a question much for secondary schools and I feel that the imperative possibly changes as pupils move closer to leaving age.

The Under17 car club uses race tracks and disused airfields to teach children how to drive, its good but it isn’t the real road.  With the current disapplication of ICT and the increased focus on the principles of computers (understanding how and why they work) I wonder if this is an argument for or against a particular OS.

Windows currently has around 80% of market share, MacOS has around 6%, Linux has 1%.  iPad and iPhone have 6% as well.

My conclusion – I’m not sure it matters overall and certainly not for the big picture of teaching and learning.  When we start to think about ICT and computer science then maybe it matters more and Windows would HAVE to be part of the mix.  School wide the OS is (probably) almost irrelevant – specifically for ICT maybe windows is more important. 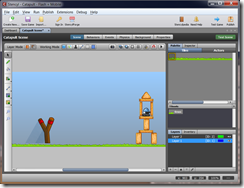 I think were fairly all agreed that Scratch is the No1 introduction to sequencing (underpinning programming) but it would be great to have something that is a little more than Scratch but less than ‘full on’ than a commercial programming environment.

The blocks of code that drag and drop visually are great but overall the graphics are fairly poor and producing anything that has the ‘feel’ of quality is difficult. No real opportunity to discuss a graphical user interface (GUI) for example.

I was recently told about Stencyl (thank you Ian Gover).  Stencyl is unashamedly focused on games but is very powerful and can quickly create ‘Angry Birds’ or ‘Super Mario’ clones with some ease.  It incorporates effects like ‘gravity’ to help through rapid development and provided ‘kits’ of resources to get students under way without spending too long in making their own (designing ‘actors’, creating sound effects etc).  It’s possible to make a pac man game in a single lesson with novice users (if they all pay attention).

The down side – making a game of this complexity takes effort.  In sequencing terms there is a lot going on at once and it’s hard to see where it all happens, there is no single button that shows everything so fault finding could be difficult.  Of course the same is true for Scratch and Stencyl is certainly far more capable.  I’m not sure Stencyl ‘draws you in’ in the way that Scratch does, in this respect it is like Gamemaker but Gamemaker is more of a natural step towards a full programming environment.

I’ve also been looking at etoys and find little to recommend it above the competition.  It has a very ‘primary’ feel and I was wondering if it could be a precursor to Scratch but the programming side is more complex so the answer has to be no.

If you’ve ‘done’ Scratch and want something more then Stencyl could be an answer but it feels like more of an after school club then a curriculum lesson to me.

Prior to Stencyl I think that I’d be working students together in teams to develop multimedia resources for Scratch, working in teams and problem solving together – they would need these ‘soft’ skills for Stencyl in any event and it may be that teamworking would be the perfect next step for students who are heavily focussed on working 1 on 1 with a computer.

The only certainty in life is change and the change is happening faster and faster.  Many conference keynote speakers start with a trip through the ‘old days’ and it’s not that long ago – can you remember when the ‘must have’ console was the Wii? – that was 2006.

Teachers of ICT are acutely aware of this and it presents us with a constant stream of challenges.  This is why it’s essential to have a clear handle on what it is we want the children to learn rather than focussing on either the hardware or the software (this isn’t the same as knowing ‘about’ hardware and software).

I’ve just has a look at there two trailers and am trying to get my head around what is going on here.

Initially I was thinking that it looked like the sort of functionality found in Apple AirPlay/ Apple TV but clearly there is a LOT more going on. I note the ‘Windows 8’ design influence in the gaming and web experience designs – both seem very ‘touch enabled’.

The worry (for me) is that whilst the technology looks developed and thought through the user experience is the critical thing.  Microsoft Surface and Kinect both look fabulous but both mean little to the man on the street.  The voice activated remote control COULD be superb, coupled with Kinect then it’s possible that you could really have something.

Of course the ‘leap’ that we spoke about a few weeks ago could superseed all of this, who knows?

Google is developing ‘Blockly’ – a programming interface similar to ‘Scratch’ but (I think) capable of outputting JavaScript, Python and XML.  Currently it is at a fairly early phase of development but already there is quite a list of controls – have a look at the ‘code’ section.  Everything seems to work, all the basics are in place and seem fairly robust.  You could use it as it stands but it doesn’t seem quite up to ‘commercial’ quality yet, probably best described as a pre-release (beta) stage – or as they say – ‘technology preview’.

The project is open source so could develop quite quickly.  They even have some ideas about why the average ‘man on the street’ might want to develop a program!